Many studies were conducted on ShivYog Farming, where miraculous results were seen on not only physical illnesses being cured but also it’s very positive results on crops.  Researchers and agricultural scientists have joined hands with ShivYog farming to study it’s powerful effects on the crops.  Farmers who practiced ShivYog farming after attending Kisan Shivirs, reported themselves a double yields in their crop produce, better quality produce, drying trees grow fruits, increase in milk production, improvement in cattle health, barren cows giving birth to calves, reduction or no use of fertilizers, fields on the verge of being sold producing crops, increase in water levels, pest infections vanishing, crop produce even in nonseason, fruit production flourishing, and even wild animals keeping off of the fields on which ShivYog farming was practiced. BABA JI WITH PANEL OF AGRICULTURE RESEARCHERS & PROFESSORS IN JABALPUR It has been observed that the fields on which ShivYog farming was practiced for a period of time started showing the following:

Studies done on the soil show: 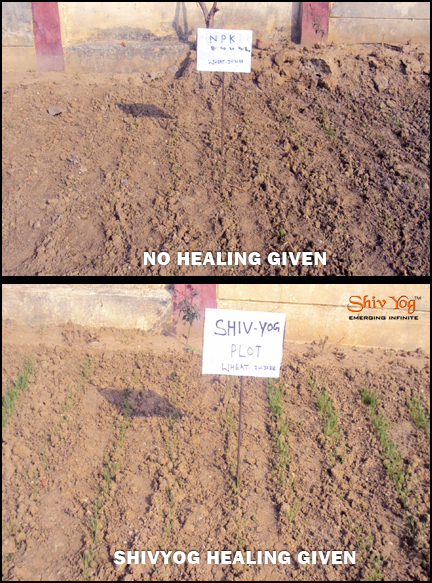 Impressed with the massive work many agricultural universities began inviting Avdhoot Shivanand ji. Teams even undertook to do research on ShivYog Cosmic farming and the experts and agricultural scientists were baffled with the results they saw.

The ShivYog Farming work was also acknowledged by Ayush, Madhya Pradesh. Based on these studies and effects, the ripple reached Austria, where the ShivYog volunteers very openly embraced the effects of ShivYog Cosmic farming by introducing it to the farmers of Austria. Along with it, many studies were conducted which showed phenomenal results.